As part of the urban renewal of the city of Hovås in Sweden, we participated in the design and implementation of the ECOdip underground containers.
A cooperation with our official Swedish distributor Avfallsekonomi Garby AB has further deepened after the gathering of all distributors in April. 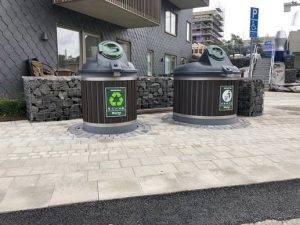 Most importantly, the container is safe and easy to charge.

A timeless collector that conforms to the surroundings. Reliable, ergonomic and larger volume.

The lifting hook is positioned in such a way that the work is easy and safe. The lid and bag move ease.